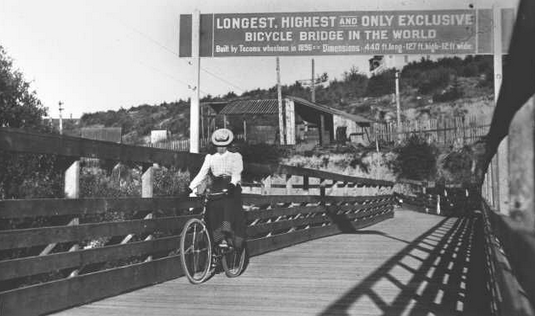 In 1898, the Tacoma Wheelmen and the City of Tacoma had developed a bicycle trail system that went as far as Longmire in Mt. Rainier National Park. The system also extended to Roy via a branch along the NP Railroad. People rode to their weekend homes on American Lake via the Lakeview route extending south from the Water Ditch Trail. These Wheelmen and their ladies were tough as one could ride to Longmire in one day, a distance of over 50 miles on less than perfect paths. When the automobiles arrived, the trail system fell away in just a few years.

In the 1970s, bike riding became popular again particularly due to the Arab Oil Embargo. By the 1980s, people began to dream about bike lanes and trail development. By 1990 around here, people began to realize it Takes a Village to build a trail, but it turns out there were several individuals with strong dreams and determination to make trails happen.

The BPA Powerline Trail was the first modern paved trail near Tacoma. Of course, the Puget Sound Energy Trail was available in South King County. Joe Ganem was the promoter for the BPA Trail. Joe was the Northwest representative for our National Rails to Trails Coalition and he lived in Federal Way. He was also a leader for the Northwest Bicycle Federation. He made the trail happen through his hard work and by building a coalition(Village) of followers.

The modern Tacoma Bike and Non-motorized Plan was created by Scott Pierson and it included dreams of future trails. Scott was a City Planner who rode his bike to work and to meetings across the City. His plan said every street is a bike street, but some streets should have special attention to create safe routes throughout the City. His plan also envisioned trails like the future Water Ditch Trail. Scott discovered the Washington State Department of Transportation had promised a trail along State Highway 16 as a way to mitigate for the highway cutting the City in two pieces. WSDOT had just built a short segment between Union and South State Street, not a complete trail. WSDOT had come to town to expand SR16 when Scott went to work getting letters from the Mayor, County Executive and many others suggesting WSDOT should complete the trail to the Narrows Bridge. Scott won his trail, probably because WSDOT realized delay would only increase the cost of expanding SR16. Later, Scott's work would become very important in getting a bike path on the new Narrows Bridge.

The Pierce County Bike Plan was created by Bob Vogel and supported by Tom Ballard, the County Engineer. The County had included a non-motorized element in their Transportation Plan, but citizen's negative reactions to the plan resulted in Tom Ballard deciding to move forward with a separate and more expanded Bike Plan. The Plan is still used today as the TWBC worked with Bob Vogel in listing every road segment that might need shoulder improvements in the future. When a road segment is ready for improvement, the Plan is consulted to see if a shoulder improvement is suggested. The Plan also referenced the Pierce County Trail Plan that included the Foothills Trail extending from Point Defiance to the Mountain. Tom Ballard was converted to thinking about bike shoulder improvements when he took his daughter on a bike camping trip to Dash Point State Park up Marine View Drive in Northeast Tacoma.

The Chehalis Western Trail was created by the hard work of advocates like Jim Lazar in Olympia. Jim later pushed for a small Utility Tax in Olympia that provides funding for Olympia's bicycle land and sidewalk improvements. John Ernest Berry III filed an ADA complaint against Thurston County when bollard fences were installed along the trail. Overlapping gates caused cyclists to dismount to get through these gates and cyclists on trikes and tandems were really affected. John won his case and the bollard fences came down. Now, the trail is used for the Seattle to Portland Bike Ride since the offending bollards are gone.

The Foothills Trails Trail is the work of three Amigos: Doctor Douglas Tait, Stan Engle and Doctor Ernie Bay. In the late 1980s, Buckley's Town Doctor became aware of rail to trail conversions. He joined with Stan Engle(Tacoma Mountaineers) and Ernie Bay to promote the trail. Doc Tait had delivered County Parks Director Jan Wolcott into this world and Jan accepted Doc Tait's vision and request to build the Foothills Trail. Jan worked tirelessly to develop a County Trails Plan and to seek grants to build the trail. Jan didn't realize it would take over 25 years to finish the trail as he wanted to finish the trail before his retirement. The three Amigos formed the Foothills Rails to Trails Coalition.

The Cushman Trail would still just be a powerline right of way without Claudia Peters, Pierce County Trails Coordinator. Claudia was a jack of all trades as she helped develop the County Trail Plan, seek grant funding and acquire right of way. I suggested using the right of way as a trail and Claudia included it in the County Plan. When Claudia asked Tacoma's Power Superintendent for permission to build the trail, he said no. Claudia went back to Tacoma Power every six months to ask permission. Finally, after three years, I suggested she go back once more and tell Tacoma Power we would be going to the Tacoma News Tribune with our story. Claudia immediately got her trail. Terry Lee finished the trail as he was a Pierce County Council Member from Gig Harbor and he also became the Director of Pen Met Park District.

The Tacoma Bridge of Glass and Foss Waterway Esplanade were both built using Federal grants available for alternative transportation. The grant programs are administered by the Puget Sound Regional Council and Ernie Bay and I were on their Enhancements Committee. The early rules were lenient and Ernie argued for funding. Bill Iyall was the primary City Employee seeking to build both projects.

The Puyallup Riverwalk was strongly supported by Ernie Bay, but it seemed too expensive to build as the County Plan envisioned the trail raised up on columns to rise above the 100 year flood plain. Fortunately, Marlene Ford was a Puyallup Civil Engineer and she found a way to build the trail in the flood plain.

The six mile long Sumner Link Trail was completed when Bill Pugh became the new Public Works Director. Bill had retired as Tacoma's Public Works Director and had developed an interest in cycling. Barbara Skinner advocated for this trail during her years of public service as Sumner Mayor, Pierce County Council Member and Sumner Parks Board Member. Barbara now serves as a Board Member of Forevergreen Trails Coalition.

The Lake Tapp's Parkway Trail was made possible by Tom Ballard, Pierce County Engineer. It is a very steep paved trail that rises up from the Valley floor to Lakeland Hills Subdivision. This new road was funded by the Transportation Improvement Board which requires bike lanes and sidewalks. Tom recognized it might be cheaper and safer to build a trail since the trail would require just 12 feet of pavement width compared to 20 feet for bike lanes and sidewalks. The trail is well used by the neighborhood and adventurous cyclists.

The Milton Interurban Trail was promoted for many years by Milt Loftlin, a Town resident and Pierce County employee. This trail will eventually connect to the Interurban Trail in King County. It lies on the right of way of the old Interurban Railway which stretched from Tacoma to Seattle. There is also hope it might someday connect through NE Tacoma to the BPA Trail in Federal Way.

University Place has great bike lanes, calmed traffic and the Grand View Trail thanks to Steve Sugg, the City Manager. Steve was the Public Works Director and carried out the traffic calming vision of the newly formed City.

The Mountain Bike Trail in the renovated Swan Creek Park is the work of Lois Stark, a Chief Planner for Metro Parks. Lois lead the community based effort for improving the park. The Evergreen Mountain Bike Alliance was called in to build the trail.

The Narrows Bridge Bicycle/Pedestrian Path was built through the efforts of Doug McDonald, the Transportation Secretary Director of WSDOT. There was actually some question as to whether or not a path should be built. Doug was a cyclist and owned an expensive pink Italian bike. He said "of course, we need to connect the Scott Pierson and Cushman Trails."

During my tenure at Tacoma Water, I re-discovered the route of the 1898 Tacoma Water Ditch Trail in South Tacoma. David Seago and Kirk Kirkland joined me on a bicycle tour of the former trail route in the 1990s. Dave wrote about the trail in the Tacoma News Tribune and Kirk promoted the trail through his work at Tahoma Audubon. Tacoma Public Work's Dana Brown found funding for the trail several times and he worked fervently in getting the trail built.

There are at least 22 governmental entities in Pierce County that could be involved in building both small and large trail segments. Residents most likely can find a trail segment very close to their homes through most of Pierce County.

I WANT TO DONATE

Already Current or Past Member?

Follow TWBC
Tacoma Wa. Bicycle Club
PO Box 112078
Tacoma, WA 98411
Contact TWBC:
e-mail : This email address is being protected from spambots. You need JavaScript enabled to view it.
It's Time!
Time to get out and go cycling!
Back to top